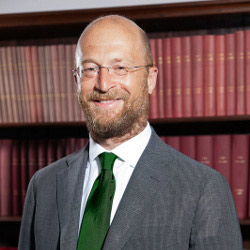 He graduated from Leonardo Da Vinci Scientific Lyceum in Genoa and took his law degree at the University of Genoa in 1996, with a thesis on comparative legal systems.

From the end of 1994 until the middle of 1996 he worked with De Orchis & Partners law offices in New York (NY, USA).
He has worked with Studio Legale Ghibellini since 1996 and is now a Senior Partner concerned primarily with labour law and commercial law.

In 1999 he was granted authorisation to practice the profession of law, and he has been registered in the Register of Lawyers of Genoa since 2000.

Since 2014 he has also been registered in the Special Register of Barristers of the Supreme Court.
He has lectured in a number of seminars on transportation contracts and related issues, joint liability in contracts of tender and IT Governance.

He currently works with a number of law firms in the USA, offering consulting services in the area of Italian maritime law and Italian tourism law and legislation.

He speaks English and French.